May 24, 2021 No Comments on Drake With His Son Accepts “Artist Of The Decade Award” At The 2021 Billboard Music Awards 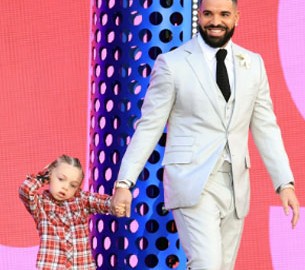 Honored at the Microsoft Theater in Los Angeles, Drake’s OVO team, along with his parents, presented him with the prestigious award. His manager, Future the Prince, had glowing praise for the self-proclaimed 6 God, labeling him as “the most kind, selfless, generous person we know.”

Headlined by his nine No. 1s on the Billboard 200, with his latest coming in 2019 (Care Package), Drake’s dominance began in 2010 with his debut album Thank Me Later. On the Hot 100 side, he banked six No. 1s during that span and shattered a bevy of chart records, including the most Hot 100 top 10s (45, to-date) and overall entries (232). Drake’s supremacy earned him the crown on Billboard’s Top Artists of the 2010s chart.

In March, Drake became the first artist to enter the Hot 100 chart at Nos. 1, 2, and 3 simultaneously, with “What’s Next” leading the pack. “Wants and Needs” debuted at No. 2, while his Rick Ross-assisted track “Lemon Pepper Freestyle” landed at No. 3.